What is Your Best Memory of Rory?

On June 25, 2009, Anne Marie of Rock-Interviews.com interviewed Brendan O'Neill prior to his appearance with Nine Below Zero at the Blues en Bourgogne festival in Le Creusot, France. During this interview he mentioned his time as the drummer for the Rory Gallagher Band. Anne Marie asked Brendan what was his best memory of Rory Gallagher, and he replied that one of the most memorable concerts was the gig at the NEA Philadelphia Stadium in Athens, Greece. Below is the transcript of that short interview, you can also click on the video to the left to watch the interview:

Anne Marie: And you toured with Rory Gallagher?
Brendan O'Neill: I did, yeah.
Anne Marie: What is your best memory, the best memory you have from him?
Brendan O'Neill: The best memories, oh, there were lots of them and it's very difficult to pinpoint one thing. Obviously we had some fantastic shows, all over the world. One very memorable one was in Athens in Greece where Rory played, he was the only band on, just the Rory Gallagher band and we played in a big football pitch, reputedly between 30 or 37 thousand people at the show and it was a magnificent event, it was a highlight really.
Anne Marie: How was Rory Gallagher?
Brendan O'Neill: He was a fantastic musician and a gentleman, he was very dedicated to his art, very dedicated to his art, in fact it was all consuming with him really, it was his life.

As mentioned in the Brendan O'Neill interview, Rory Gallagher played to a packed crowd at the NEA Philadelphia Stadium in Athens, Greece. The country had seen very few rock stars of Rory's stature since the infamous Rolling Stones Debacle in 1967. On September 12, 1981 Rory and his band performed, with no supporting act, to an Athens crowd of 40,000 strong. Like the Stones, Rory played against a backdrop of political and social upheaval. Although not nearly as tense as the pre-election firestorm that Jagger and company faced in 1967, the political climate Rory faced there in 1981 was one of trepidation as it became increasingly likely that the incumbent "New Democracy" party would suffer its first defeat at the hands of the Panhellenic Socialist Movement (PASOK). Indeed, less than a month later "PASOK" won in a landslide and became the first socialist government in Greece's history. Rory's show at the Philadelphia stadium was, at least muscially, no less momentous:

... The news of Rory Gallagher concert circulated by word of mouth to all schools, the courtyards, the schools, cafes, computer, squares, illegal radio stations in FM ... and the name became a legend -- Elias Tomaras, garagefuzz21.blogspot.com

They expected fifteen thousand people and that's serious! And I said well, they must be kidding!! I didn't realize that you could have that amount, but as it turned out, there was twice that many, or thereabouts, but half of them were outside, and either they supposedly gate crashed, or else the police over reacted because the audience were all up on their feet.

It was a great gig really if I say so myself and, all of a sudden, the police started getting a little heavy with the audience, things started getting a little bit hard, y'know. We were just playin' away it really only all happened after the encore. The crowd were grand, but y'see they don't have all that many big shows like that, and I suppose the police were nervous. There was the election coming up, as well, in two weeks or something, so I think they used the concert as an example to show how they could keep control of a crowd, or something like that! -- Rory Gallagher: A Rap on the Road, Hot Press Magazine, 1981 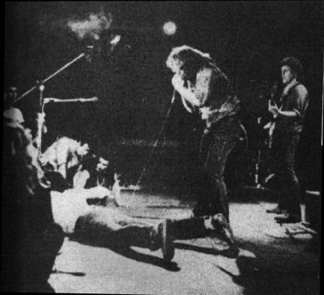 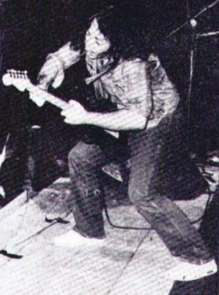 (Photos of Rory at the NEA Philadelphia Stadium courtesy of Stefanos)

If anything, the heavy-handedness of the police, made things worse, and a full-fledged riot ensued:

... the atmosphere within the country was very volatile. With the stadium packed to bursting point, you could feel the tension in the air, but the gig itself was amazing... the crowd loved it, but as we hit the closing chords of the final number, it all kicked off. It seemed like every single member of the 35,000 crowd went berserk and within minutes a full-scale riot had broken out. -- Gerry McAvoy autobiography, Riding Shotgun

In an interview for Hot Press magazine, Rory describes the very real danger they found themselves in, and their escape from the mayhem :

A short while into the show, I started to see all these flames, way at the back of the stadium. They were burning down restaurants and shops on the streets outside the gig. I think they wouldn't let enough people into the stadium or else they let too many in but, anyway, the police arrived and started to fire CS gas at us. It was the most frightening gig I've ever done. That CS gas is dangerous stuff. It messes up your eyes and you can't see where you're going or anything. When we eventually got backstage, there was so much confusion that we couldn't be sure who was going to protect us and who might attack us. There were those semi-militia guys walking around and they looked very threatening. So we just jumped into a car and tried to head back to the hotel. Then, on the way, we ran out of petrol so we had to walk. And there was so much going on, it was a nightmare. We were soaking wet and our eyes were watering and we were all literally trembling. The gig itself had been great by the way. But it was very frightening. I just didn't want to die in a football pitch in Greece, not even knowing what was happening -- Rory Gallagher, Tangled up in Blues, Hot Press Magazine 1992

Brendan O'Neill's fourth gig as the drummer for the Rory Gallagher Band was a very memorable event indeed. Unfortunately the bootleg tape of this show is of very poor quality. I've uploaded it to the server just the same. So have a listen to Rory in Athens, and then ask yourself the same question Anne Marie posed to Brendan O'Neill at the Blues en Bourgogne festival. What is your best memory of Rory? I think you'll agree that it will be hard to top his.